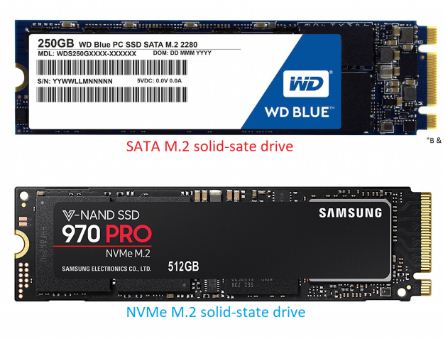 Introduction to the hard disk and its features:

– On this topic we will provide you with a comprehensive guide on the question of what are nvme hardd and its features and why they are considered one of the best volumes so far.

Hard disk is one of the most important components of any computer and there are many different types of storage units, but many computer users rely on HDD because of its good speed in reading and writing data in addition to its good price so it is considered a suitable option for For many computer users.

However, the volumes have evolved a lot as many companies have produced other faster and better types of HDD, and one of these types is the  SSD hard which was considered a big transfer in the world of volumes, and with more advances came hard nvme which set records for its speed .

The word nvme is an abbreviation of the phrase (Non-Volatile Memory Express) which is a type of volume, and hard drives nvme was issued for the first time in 2013, and these imports are among the fastest and best storage units for computers so they are considered the fastest to date .

What distinguishes hard drives nvme is that it depends on the PCIe port for data transfer and this provides direct communication with the computer motherboard instead of transferring data through the console as in the SATA port.

Hardwares nvme come in many forms and the most popular type is M.2, the width of this type is 22 mm and the length varies between (30 – 42 – 60 – 80 – 100 mm), and this type is very small in size enough to place it on the motherboard and for this It is very suitable for compact computers.

The Samsung 970 Hard is one of the strongest PCIE storage drives available on the market today as it offers data writing speeds of 3,938 Mb and excels with VNAND technology. While other discs are available in a lower price and speed, such as Crucial P1, it is available in 3D NAND technology and a data transfer speed of 2,000 Mb.

What is the difference between hard drives nvme and SSD:

NVME volumes are much faster than SATA hard drives, as PCIe 3.0 reaches a maximum speed of 985MB per second (per path), whereas on NVME hard drives 4 tracks of PCIe are used and therefore theoretically the maximum speed is up to 3.9Gbps (3940 MB)

On the other hand, the fastest SATA-type SSD hard disk was a speed of no more than 560 Mbps, which is the Samsung 860 Pro hard provided by Samsung.

The Samsung 970 Hard is one of the m.2 NVMe drives currently on the market that has a speed of up to 4 times the SATA hard drives, and here shows the very clear difference in speed between nvme hard drives and SATA hard drives.

SSD NVMe PCIe drives are available with storage capacities starting from approximately 240GB, then 500GB to 1TB, and you can rely on them to store your most important files such as Windows, game files, and design programs that need strong download speed and high performance.

Do you need to buy NVME hard now?

In fact, this depends on your use of the computer, in spite of the very wonderful advantages of nvme discs, there are many old motherboards that do not support them, in addition to the high price compared to other types. But it is the fastest, most powerful, and the future with either V-Nand or 3D-Nand technology.

So, if your use of the computer is limited to normal use, such as surfing the Internet and using some programs and intermediate games, then there is no problem relying on SATA SSD, which is considered an improvement in speed over the usual HDD hard drives used for storage, and you will feel the difference if you have not tried it before.

If you use a computer a lot like playing 4K videos and playing powerful programs and games, paying some cash on NVMe Hard will help you use the computer faster. It is also a powerful assistant for all video makers in speeding up tasks with design and production programs.

The choice, of course, is for you. We choose for you in the nominations the best tablets that are available in the market according to speed, price, and evaluation. We will devote another article to explore all the available on the market in detail and exact specifications so follow us.

Ultimately the choice remains yours, either rely on NVMe hard drives to enjoy the high speed with a high cost or use SSD with lower speed and lower cost.

The best way to maintain and repair the hard disk